I am not really the networking sort. It seems a bit contrived to go somewhere specifically to swap cards and meet “useful” people. No doubt I’m backward and unambitious.
Being curious though, I betook myself to one of these mysterious events at The Tileyard Studios on Thursday 27th April.
On the last Thursday of every month (except May, because the organisers will all be in Ibiza…. I know, how dare they?) The Tileyard, in partnership with Notting Hill Music, put on one heck of a show.
I was impressed. I don’t know quite what I was expecting, but it wasn’t a micro-boutiquey festival with amazing live acts, extremely decent hot food (falafel wraps, authentic curry pots) and free beer *
Admittedly It didn’t begin all that well for me. Since it was raining and also because I was dying for a pee, I ducked straight inside the building. The bar and cafe were heaving, riotously rowdy and extremely “networkey.”
My friend Phil AKA The London Guitarist has been to loads of these events. He’s a pro. As soon as we arrived he spotted a friend and got chatting. Meanwhile I found the least crowded corner and stood in it, looking and feeling like a displaced dork.
It’s an unfortunate affliction for a performer to feel nervous and suffocated in noisy crowded spaces, but I can’t help it. An overpowering aversion to walking up to complete strangers and introducing myself is also probably a bit of a drawback in a networking environment. So I stared dolefully out at the happy folk from the safety of my corner, cursed myself for my social ineptitude, and wondered how to leave without offending Phil, who’s a jolly good friend and always encourages me to get out and push my music.
“You look a bit overwhelmed” he commented, having discovered me in my corner.
I mumbled something about not being good in crowds…
“You could always go outside for a bit” he pointed out helpfully.
Silly me! Of course! Once out in the fresh air I felt a lot better.
Then I spied the marquee for the first time. In fact, I took a good look around and noticed lots of things for the first time. Like the free beer* table. The food kiosk. The stage being set up inside the marquee. This was more interesting, no question about it.
The first act, a baby-faced young man called Joe Worricker, began singing just as I ducked inside. It’s not often that I am really captivated by a voice. This was one of those occasions. I don’t even know how to describe the warmly mellow yet brassy, bassy quivering jazziness, so just check him out and listen for yourselves. I closed my eyes and allowed myself to be swept away.
Next up was another absolutely mind blowing voice, the owner of which was wearing the coolest outfit, ever. Some kind of pearlsesque catwalk satin snow suit complete with fur collar. 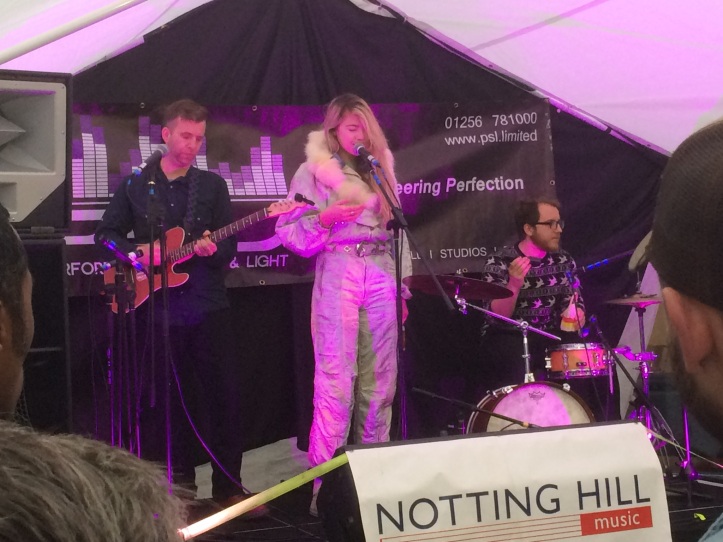 If I had to liken Danica Hunter to another artist, I’d have a difficult job! Vocally I’d say the insane fierceness of Turner meets Winehouse with just a pinch of Bjorks’ jerky quirkiness thrown in. Actually, Bjork is also the only artist I can imagine wearing a snowsuit on stage, so perhaps there’s a similarity style-wise too. I’m only making comparisons to give you some context though. Frankly, the girl is freaking unique! Check out this video.
For two hours that small marquee buzzed with brilliant talent, more than a little feedback (of both the sonic and verbal kind) and folks having a jolly good time. Out here the “networking” was natural. People chatted about the music, the artists and the vibe of the live show.
Phil looked like a kid in a candy store when Pete Brown and Malcolm Bruce got up to do a few numbers. That’s Malcolm, Son of Jack Bruce. From Cream (yes, THE Cream!) by the way.
I was 10 metres from some blues rock legends. I actually shook hands with Malcolm Bruce who, along with Kofi Baker on drums (son of Ginger) and Will Johns (nephew of Clapton) comprise the second generation line-up of Cream. To celebrate the 50th Birthday of Cream’s debut album, “Fresh Cream” the band, (er…. “Freshest Cream” Perhaps?) are touring Australia and New Zealand through May and June. Check out the details here.
I mean, it would be insincere for me to pretend I’m a big fan, since the Cream heyday was way before my time and Blues Rock isn’t really a genre I’m into. But still, I do feel privileged to have heard Pete & Malcolm play live in such an intimate setting. That is not something many people get to experience in a lifetime.
Anyway, gushing over!
I will definitely be going back for the June event and I really recommend you guys check it out too. Actually, just check out The Tileyard in general – it’s an amazing complex of studios, rehearsal and writing rooms, event and meeting spaces. The on site cafe bar serves great fare and has a lovely vibe. And it’s only minutes from Kings Cross station!

* The beer is free. However beside every line of free bottles, there is a prominently positioned donation receptacle and the guardians of the beer tables have been trained in giving “the look”… you know the one I mean.
The look that says:
“go on, I dare you be the only person here too mean or poor to cough up. Make my day, loser!”
Needless to say, one pays.
However, also needless to say, considering the fantastic event, one is very happy to do so!